The cloud did end up having a silver lining for Cisco after Chuck Robbins became CEO. He has double-downed on Cisco’s network strategy and culture and improved its execution. (CSCO: NASDAQ).

Back in the 1990s and 2000s, Cisco was the king of the internet and the lord of enterprise networks. Its routers and switchers made networks hum the world over. Thus, the cash flowed in.

But in 2006, a dark cloud began to form when Amazon Web Services launched its first cloud networking service.

At first, Cisco did not see cloud computing and software-defined networks as a real threat. But by 2015, it was fighting for its long-term survival.

Robbins was a Cisco insider of 18 years when he became CEO.

He graduated from the University of North Carolina with a mathematics and computer science degree.

He cut his teeth on Cisco products while working for a bank as an application developer.

In 1997, Chuck Robbins joined Cisco as a Sales Account Manager and then slowly rose through the ranks. He has held various VP positions before becoming CEO in 2015.

Robbins understands Cisco. And this, combined with his ability to execute, has allowed him to make changes fast.

“The perfect candidate is an insider who knows that you need to change.”

Within months of becoming CEO, many senior executives left. Today, only three of Robbins’ 12 direct reports held their position when he became CEO.

The most significant change Robbins made was being strategic. He realized that Cisco had missed an opportunity with cloud computing. But instead of pivoting head-long into the cloud, he focused on networks instead. Why?

Robbins looked at what customers wanted and realized that it was not the cloud they wanted per se. Instead, they wanted the convenience and flexibility of the cloud.

He also saw that many companies would only partly migrate to the cloud and keep an enterprise network.

In short, he saw that Cisco could be the bridge between the cloud and enterprise networks.

For example, in 2018, Cisco launched the Catalyst 9000 series of network switches. These are programmable, allowing users to automate security and compliance procedures like they would in the cloud.

Robbins has also introduced a subscription model for Cisco’s network services. This strategy has paid off. Subscriptions represented 78 percent of revenue in FY2020.

“The irony of this whole cloud transition is that it is actually one of the key forces that led to our growth, whereas four or five years ago, it was viewed as an existential threat.”

While Robbins was making his strategic changes, he double-downed on Cisco’s culture.

Cisco was already well respected for being a socially responsible company, but Robbins has upped the ante.

Robbins has set Cisco the target of positively impacting one billion lives by 2025. This includes programs like “Networking Academy,” which is providing internet connections to low-income countries.

Robbins is also improving diversity within Cisco. Six of his direct reports are female.

In 2019, he implemented a 100-day sprint to improve racial equality within Cisco. He was inspired by the book “White Fragility.” He has also been proactive in talking to staff about recent police shootings of African Americans.

Revenue has been steady since Robbins took over with a slight increase of 6.5 percent between 2015 and 2019 (see chart below). The threat of the existential cloud has dissipated. 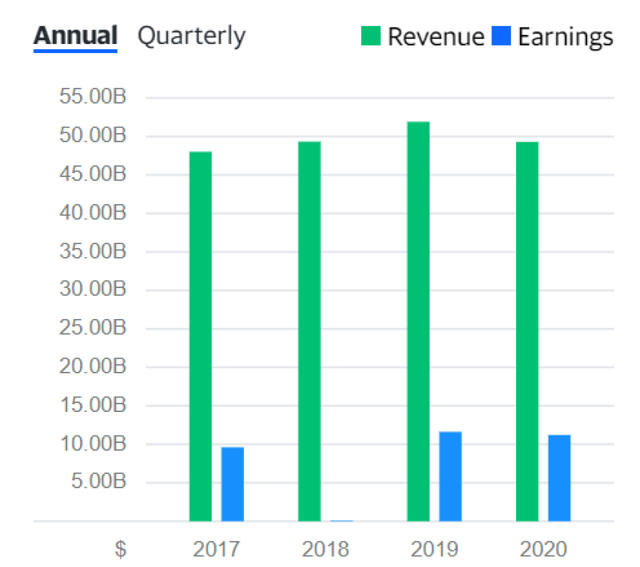 The share price reached a high in April 2019 of $55.90 but has fallen since. The coronavirus also hit it. It is currently around $35, which represents a 26.3% increase from when Robbins took over.

Since August, the stock has trended down towards support levels set in March (see chart below). 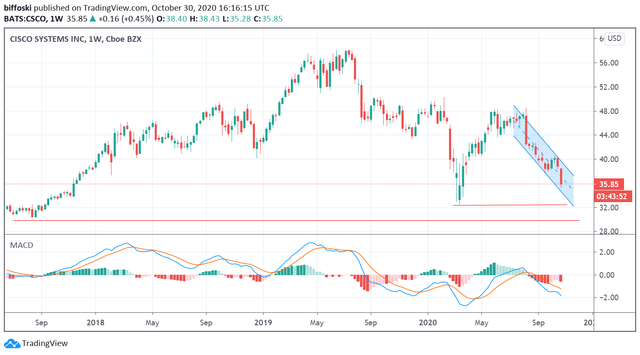 Why is the stock down since August while the rest of tech is up and demand for Webex video conferencing has been strong? The earnings update released in August showed strong results for Q4 (July ending). But weak guidance for Q1 2021 – revenues are expected to fall in the range of 9-11%.

The software side of the business is doing well. But hardware is suffering because of companies’ cuts to capital spending during the economic slowdown. Cash flow remains strong.

Once the economy recovers, Cisco’s share price should recover too. The Q1 earnings update is on November 12.