Is Elon Musk a real-world Tony Stark (aka Iron Man), a billionaire eccentric who wants to save the world? He even cameoed in Iron Man 2. Whatever you think of Elon and Tesla, you have to admire him.

The man is a visionary who stakes his own money and turns his innovative ideas into billion-dollar companies. Let’s look at the life and accomplishments of Elon Musk and see if Tesla (TSLA: NASDAQ) is going up or crashing down?

Elon was born in Pretoria, South Africa, in 1971. His parents divorced when he was nine.

Around that time, Elon also fell in love with computers and science fiction. This love proved no mere escape because Elon was also an entrepreneur by nature. By 12, he had sold his first computer program.

After high school, Elon Musk emigrated to Canada and then the US for university. His love of science was dominating.

But after two days of his Ph.D. at Stanford, he left to start a software company with his brother and friend, called Zip2. His inner-entrepreneur was breaking-out.

Those were the days of the dotcom bubble. And in 1999, Compaq acquired Zip2, and Elon walked away with $22m.

But Elon did not walk away from entrepreneurship. In 1999, he invested more than half his fortune ($10m) into X.com. This was an online bank that merged with Confinity, PayPal’s owner, in 2000.

Again, Elon was just getting started. Now he had the serious money and experience to pursue his dreams.

“Sooner or later we must expand life beyond this green and blue ball – or go extinct.”

Elon’s first step to the stars was to send a mini-greenhouse to Mars, the “Mars Oasis.” After being spat upon by Russian engineers and quoted an astronomical price for a rocket, he decided to build his rocket – SpaceX was born.

He invested $100m of his own money into SpaceX. Last week, Morgan Stanley valued it at $100bn.

Elon’s vision extended beyond space. In 2004, he led Series A investment into a small electric carmaker, Tesla. He became Chairman, and after the Great Recession in 2008, he became CEO.

His vision for Tesla, like all his ventures, is grand but straightforward. Innovative design that pushes the envelope makes money and builds a better future.

Elon is now the longest-tenured CEO of a carmaker globally. And with that, Tesla has become the most valuable car company in the world. Despite the stellar performance, there have been many short-sellers of Tesla, long predicting a crash. They point to Tesla’s massive debt, future competition from traditional carmakers, and a lack of profit.

But Q3 results show Tesla making a profit for the fifth consecutive quarter and producing a record number of vehicles. Its gigafactory in China is also now the envy of traditional carmakers. The question is, can this be sustained in the long-term? Time will tell, but at the moment, the short-sellers are losing their bets.

As for recent trading, after an initial decrease with COVID-19, the stock price rose again, reaching record levels in early September.

Momentum has cooled since then, and despite a recovery from a fall in September, recent candlesticks suggest (with the latest being a hanging man) that the stock will be trending down again. It will first test resistance at $400, and then if it falls further, at $350 (chart below). 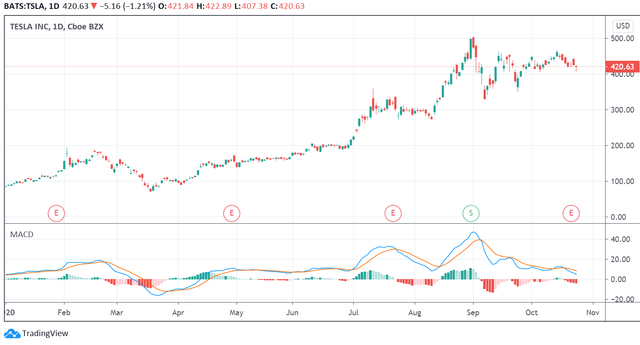