Tadashi Yanai grew up above his father’s tailor shop in Ube, Japan. Today, his company, Fast Retailing (9983: TSE), is the third-largest retail clothing company globally, and Yanai is the richest person in Japan. He owns two golf courses in Hawaii!

Fast Retailing’s brands include Uniqlo, GU, Theory, Helmut Lang, and J Brand. It has over 2,100 stores in over 24 countries.

Yanai has built his retail empire through ambition and innovation. Some may say that growth in the US and Europe is slow. But he is the emperor of clothes in Asia with over 810 stores in Japan, 780 in China, and 251 in south-east Asia.

Yanai is ambitious. In his Tokyo office, Yanai has Japanese calligraphy framed on his wall. It reads, “Word’s number one.”

His goal is for Fast Retailing to overtake H&M and Inditex (Zara) to become the world’s number one retail clothing company.

“Nobody would get excited if you said that you were aiming for bronze or silver.”

He also sees Amazon as a competitor and refuses to sell his products on their website.

“I may sound overconfident but I think we can match Amazon.”

This is not an empty talk. Yanai took his father’s modest business and expanded it from small-town Japan to Tokyo. He ended up making it a global power, particularly in Asia.

He was also a director of the successful VC firm Softbank for 18 years. Softbank has a market cap of $135bn. Tadashi Yanai appeared to be the only director who could stand up to Softbank’s enigmatic founder Masayoshi Son.

He started Uniqlo (Unique Clothing Warehouse) in 1984. His goal was to sell mass-volumes of casual clothes to the Japanese. He wanted to cater to everyone. His strategy proved successful, and the number of Uniqlo stores continues to grow.

But in the 2000s, Uniqlo was starting to hit a wall. Customers wanted more. They loved Uniqlo’s low prices and style, but they were often disappointed in the quality of its products.

Yanai responded. In 2004, Yanai committed his company to more outstanding quality and innovation besides low prices. He called it the “Global Quality Declaration.”

He began to work more closely with suppliers. He sent teams of quality inspectors out to suppliers and partnered with them in R&D. This has led to innovative products like the Heattech range and, very recently, the AIRism COVID-19 masks.

Uniqlo is now seen as high quality at a reasonable price.

“Most apparel makers tell us to do things at low cost. But Yanai-san asks us what we need in order to do things he wants us to do,” a Japanese textile company explains.

Tadashi Yanai is a big believer in physical stores, but he has been quick to innovate with digital marketing, eCommerce, and the use of technology in-store.

In 2007, Uniqlo launched a now text-book digital viral marketing campaign with Uniqlock. Uniqlock was a widget that showed a 24/7 clock interspersed with music and dancers wearing Uniqlo clothing. It became a global hit, and the widget was embedded in over 27k blogs within the first year.

An example of in-store tech is Uniqlo’s “Umood kiosks.” The kiosk makes clothing recommendations to customers based on their feedback to images of clothing. They used contactless neuro-receivers to collect customer feedback. No wires and no buttons!

“Uniqlo is not a fashion company, it’s a technology company.” 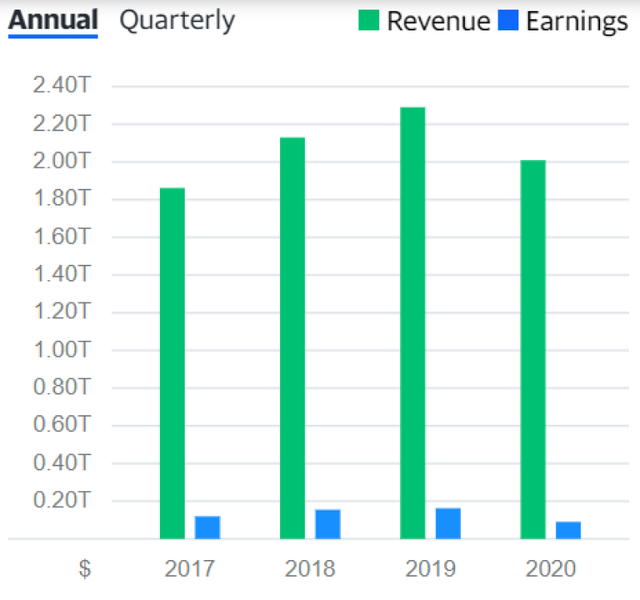 Over the same period, the share price has increased by over five times and is now at an all-time high despite the pandemic.

Since May, the signal line has remained above the MACD line. There was a downward trend in June and July, but since the end of July, the stock has been trending up in a channel (chart below). The last two weeks show a bullish engulfing pattern, indicating some more upside. 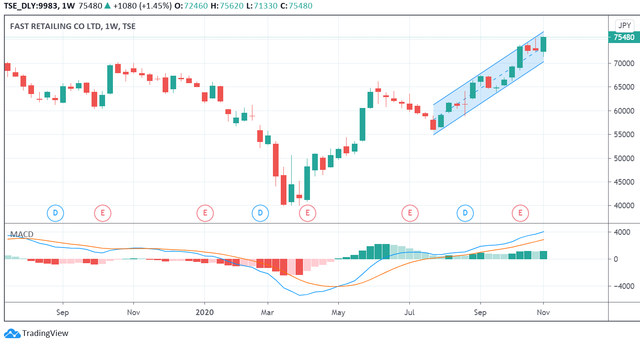